Last week’s edition of The Game was awesome. There’s no getting around it. I went in with guarded optimism, my weekly statistical projection giving the Buckeyes a very close victory. Instead, they dissected Don Brown’s “gameplan” like he was a middle-of-the-pack Big 12 defensive strategist. And, in just four hours, Urban Meyer turned Jim Harbaugh from “Revenge Tour” headliner to lowly Big Ten roadie.

I won’t give you much more of a summary than that. You all watched it and many of you have probably replayed it multiple times already. If you’re looking to continue reliving last weekend, there are several great options for you to do so: Here, here, here, and, of course, here, for starters.

But, with bigger things on the horizon this week, I won’t spend any more time in this particular write-up on The Game, except to show you where my rivalry projections went well and where they looked more like Brandon Watson trying to cover Chris Olave (or Johnnie Dixon… or Parris Campbell… or K.J. Hill).

For as excited as we all were (are) about the dismantling of Jim Harbaugh’s Wolverines last week, the end goal is right in front of the Buckeyes right now, and it has nothing to do with Michigan. In fact, the opponent is one that very few predicted would win the west before the season started. The Northwestern Wildcats will make their first appearance in the Big Ten Championship Game, and you’d better believe they’ll be ready.

The Buckeyes, the seasoned veterans of the league, will be making their fourth appearance in this game in six years.

Will OSU be able to move past last week’s accomplishments and the 180 in the national media and focus on the task at hand?

Or, will they find themselves unprepared for the underdog Wildcats, still coming down from The Game, and struggle as they’ve done in a handful of contests this season?

Northwestern has a strong front seven and, overall, a good defense. That’s a large part of why they’re here in the conference title game. Unfortunately for them, their weakness on that side of the ball is in pass coverage. Only three teams in the conference allow more passing yards per outing than the Wildcats. Of those, Ohio State has played two, Indiana and Purdue, and put up 455 and 470 passing yards on them, respectively.

Dwayne Haskins, you might recall, just tossed 6 touchdowns and threw for almost 400 yards against a secondary that was touted as the nation’s best pass defense. I think Pat Fitzgerald and Mike Hankwitz, their defensive coordinator, have watched the film from OSU’s shredding of Michigan last week and will gameplan accordingly. They’ll look at creative ways to get pressure on Haskins, not allowing him the time in the pocket that the Wolverines did.

In what could potentially be Haskins’ last start against a Big Ten opponent, I think that he comes out and make another statement. He completes over 25 passes at just above a 65% clip and throws multiple scores. He protects the football and rushes a few times for positive yardage. His passing puts over 1,000 yards between himself and the next closest Buckeye quarterback in the record books. In addition, though there was a significant push for it in recent weeks, the Tate Martell package fades away. Haskins is the only OSU player to take a snap at the position.

Mike Weber and J.K. Dobbins are a nightmarish running back duo for opposing defenses to prepare for. They’re also extremely difficult to predict on a weekly basis. In the eleven games in which they’ve both received carries, Dobbins has been the leading rusher six times to Weber’s five. The pair have combined for almost 1,800 yards this season, and punched in 13 touchdowns.

Northwestern’s run defense will be one of the best that Ohio State has faced this year, and the top defense that doesn’t reside in the state directly above ours. Linebackers Blake Gallagher and Paddy Fisher will undoubtedly make themselves known, as both are in the top 15 in the conference in tackles. I think that the Wildcats slow the Buckeye run game down from a total yardage perspective, but that the OSU running backs are efficient with their carries.

I see Weber as the hot hand in this title game, as he’s had over 90 yards in each of his last three outings and averaged over 6.6 yards per carry. With that said, both RBs will be above 15 carries on the day. Weber crashes across the goalline on a 15-yard run, and both backs register a reception. Despite not leading in carries or yards, Dobbins breaks the 1,000-yard mark in this game for the second straight season. In addition to Weber and Dobbins, Demario McCall will earn a carry in this game as well, as Ryan Day and Kevin Wilson do their best to show a few looks with him on the field.

What the heck, I’m awarding Dobbins his 1,000 yard accomplishment, let’s go ahead and do the same for the receiver group. Parris Campbell, who currently sits 93 yards shy of the milestone, will make the most of his six receptions. He finishes with 101 yards through the air and a TD, as he becomes the first Buckeyes wide receiver since Michael Jenkins in 2002 to break the 1,000-yard barrier.

K.J. Hill does his usual damage to the tune of six catches as well, and finds himself in the endzone once more. Demario McCall is my wild card in this game, as I believe he gets on the scoreboard for the first time this season on one of his two catches. Joining him in reception total are Dixon, McLaurin and Victor, each finishing with similar totals. The freshman phenom, Chris Olave, will hear his name called again as he rides his momentum from last week to another three catches and 43 more yards.

The veteran wide receivers (and speedy youngster) are too much for the Northwestern secondary. They find success throughout the game and put up three scores, with the help of the Heisman-hopeful tossing them the ball.

Though I called my shot with Tuf Borland leading the way last week, I think it’ll be Malik Harrison leading the way in tackles this time. Northwestern will spread the field and make the Buckeyes earn each and every stop as they pull out all of the tricks. I expect them to try to confuse the Buckeye linebackers with motion. They’ll utilize everything they learned from Maryland, Purdue, and the others that have tested the Silver Bullets this season.

Ohio State gets pressure early and often, resulting in at least three sacks and several tackles for loss on a Northwestern team that often struggles with protection. Jonathon Cooper picks up where he left off against Michigan, registering a sack of Clayton Thorson (one that doesn’t involve the weakest facemask call known to man). Brendon White, finds himself carrying another INT this week. This time, though, he finishes his return properly and gets himself into the end zone.

The Bucks aren’t perfect in this one, and that’s largely because the Wildcats come out with a much better gameplan than they saw last week. Northwestern attempts well over 40 passes in this game, going with what they feel is their best bet to move the ball against the Buckeyes. The Wildcats are currently last in the league in rushing (understandable given the loss of their starting RB, Jeremy Larkin), so they’ll attempt to match Purdue’s efforts through the air and hit Flynn Nagel, their leading receiver (back from a leg injury last week) as much as possible. Now, that’s not to say that Isaiah Bowser can’t, and won’t, get some yards on the ground, but I think the Buckeyes hold him to around 85-90 yards on 20-22 carries. 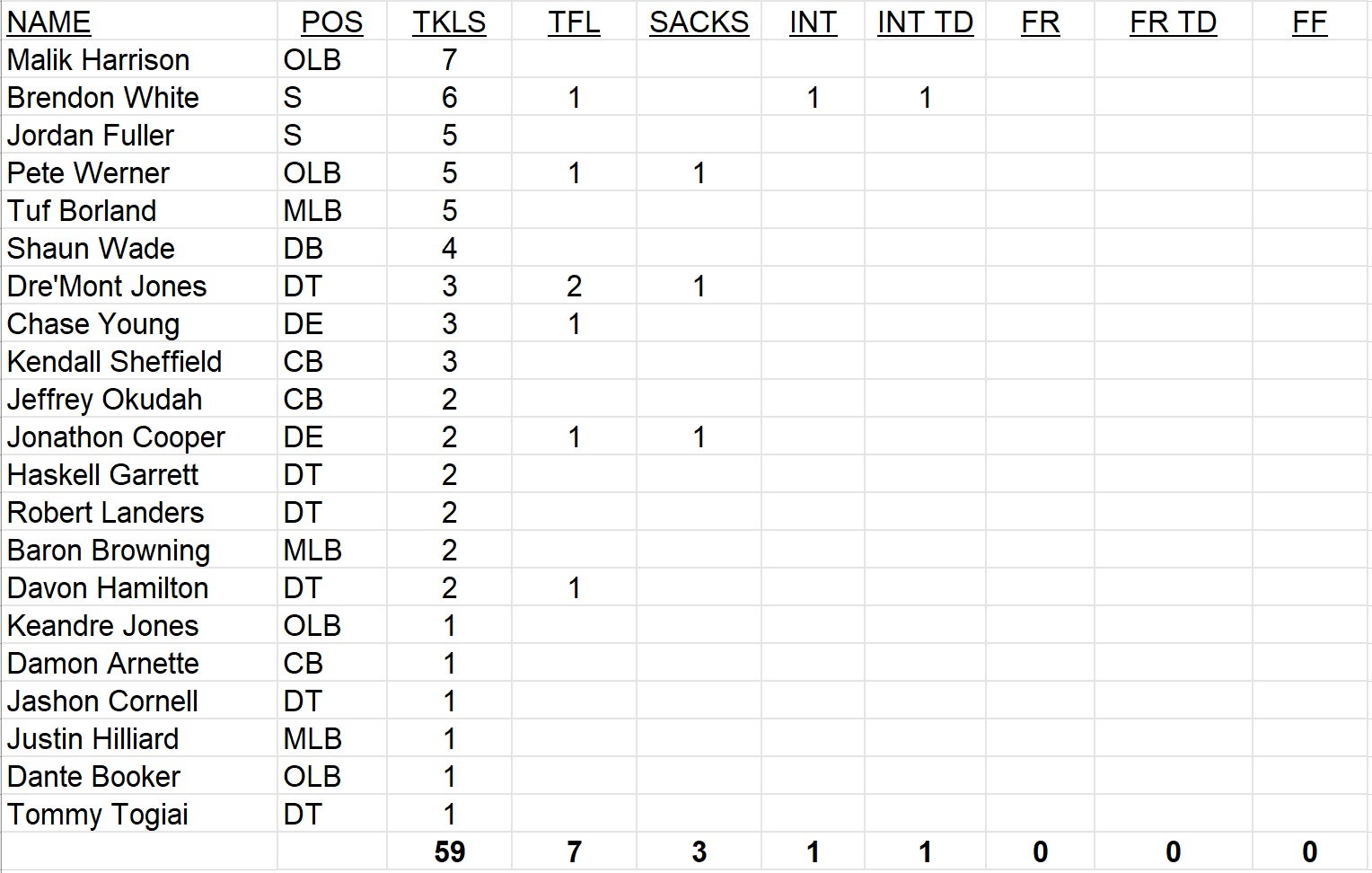 Ohio State doesn’t put up the dominating effort that we saw in the Big Ten Title Game in 2014, but wins another championship… and waits for what’s next.